Born 1 January 1972 (age 44) Bishop's Stortford, United Kingdom Website onlyagame.typepad.com Era Contemporary philosophy Region Western philosophy School Fictionalism Main interests Game Design, Ethics, Metaphysics, Philosophy of Language, Philosophy of Religion, Philosophy of Science Notable ideas avatar doll, demographic game design, funnelling, breadcrumbing, orthodox science fiction, moral chaos Influences Ludwig Wittgenstein, Immanuel Kant, Søren Kierkegaard, Mary Midgley, Kendall Walton, Michael Moorcock
2016-05-12 18:08:40 Chris Bateman
Author of 'Wikipedia knows nothing'
This article is being considered for deletion in accordance with Wikipedia's deletion policy.
Please share your thoughts on the matter at this article's entry on the Articles for deletion page.
Feel free to edit the article, but the article must not be blanked, and this notice must not be removed, until the discussion is closed. For more information, particularly on merging or moving the article during the discussion, read the guide to deletion.

This article is an autobiography or has been extensively edited by the subject or by someone connected to the subject. It may need editing to conform to Wikipedia's neutral point of view policy. There may be relevant discussion on the talk page. (April 2011)
Chris Mark Bateman
Chris Bateman.jpg
Born 1 January 1972 (age 44)
Bishop's Stortford, United Kingdom
Website onlyagame.typepad.com
Era Contemporary philosophy
Region Western philosophy
School Fictionalism
Main interests
Game Design, Ethics, Metaphysics, Philosophy of Language, Philosophy of Religion, Philosophy of Science
Notable ideas
avatar doll, demographic game design, funnelling, breadcrumbing, orthodox science fiction, moral chaos
Influences
Ludwig Wittgenstein, Immanuel Kant, Søren Kierkegaard, Mary Midgley, Kendall Walton, Michael Moorcock
Dr. Chris Mark Bateman (born 1 January 1972) is a game designer, outsider philosopher and author, best known for the games Discworld Noir and Ghost Master, the books Game Writing: Narrative Skills for Videogames, 21st Century Game Design and Beyond Game Design: Nine Steps Toward Creating Better Videogames,[1] and his eclectic philosophy blog Only a Game.[2] Until 2012, Bateman was the managing director of International Hobo Ltd, a consultancy specialising in market-oriented game design and narrative, which he still consults with.[3] He has worked on more than forty published games[4] and is currently pursuing research into the neurobiology and aesthetics of play at University of Bolton,[3] where he has earned a PhD by Publication on the basis of his work.[5]

Contents
1 Biography
2 Game design and narrative
3 Philosophy
4 Blogs
5 Works
5.1 Books
5.2 Games
6 References
7 External links
Biography
Bateman was born in the United Kingdom in the historic market town of Bishop's Stortford, but moved to Ventnor, Isle of Wight before he was one year old. He spent much of his time growing up in Steephill Cove, a secluded bay on the south coast of the island, where he studied marine wildlife, snorkelled, and surfed during the winter. During one such winter, he was almost killed in a surfing accident having chosen to go out into stormy waves despite a warning flag cautioning against entering the water. He was rescued by a local crab fisherman.[6]

In 1990 he moved to Manchester to study as an undergraduate and postgraduate at Manchester University, originally in Physics with Astrophysics but later switching to Computing and Information Systems. During these years, he was a contributing writer to the magazines GamesMaster International[7] and Cryptych.[8] Practising his game design skills by producing tabletop role-playing games with Discordia Incorporated,[9] he also won a game design competition run by Task Force Games with his card game Star Fleet Officers.

Graduating with a master's degree in Artificial Intelligence/Cognitive Science in 1995,[10] he earned a job at Perfect Entertainment in Norbury, where he worked on numerous videogames including Discworld II and Discworld Noir, for which Terry Pratchett worked as the editor.[11] His work on the dialogue for Discworld Noir was praised by The Times newspaper as one of the best games ever scripted[12] and by Terry Pratchett as "good enough to be a novel in its own right."[13]

Bateman left Perfect Entertainment in 1999 to set up his own company, International Hobo Ltd.[14] Ernest W. Adams, founder of the IGDA, joined International Hobo in 2001,[4] and he and Bateman have been working together along with other game designers and narrative experts ever since. In 2007, he received the IGDA's prestigious Most Valuable Player award for his contributions to the game development community, including establishing both the IGDA North West UK chapter and the Game Writers Special Interest Group.[1]

In 2000 he lived and worked in Knoxville, Tennessee, but in 2001 moved back to Manchester having married Adria Smiley, who graduated from the University of Tennessee that year. He also lived in Knoxville for 15 months while working on Turner Interactive's FusionFall game. February 2011 saw the birth of his first son, Soren Albert Bateman,[15] and his second son, Leto Jack Bateman,[16] was born three years later.

Bateman has pursued highly acclaimed independent research into how and why people play games. In 2009, he was invited to sit on the IEEE's Player Satisfaction Modelling task force, in recognition for his role in establishing this research domain.[17] His most recent player model, BrainHex, is based upon neurobiological principles published in his paper The Neurobiology of Play (with Doctor Lennart Nacke),[18] and the BrainHex test has been taken by more than 80,000 people.[19] In 2014, he became the first person in the world to receive a doctorate in the play aesthetics of games,[5] and was appointed to the editorial board of the International Journal of Play.[20]

Bateman also has an abiding interest in religious belief and practice. He has travelled the world studying religious practices and beliefs, and has taken part in everything from Native American sweat lodges to Pagan solstice celebrations, as well as visiting Buddhist and Shinto shrines in Japan, and witnessing traditional tribal religions in Africa whilst living in the Sahel Reserve near the Sahara desert.[10]

Game design and narrative
In 21st Century Game Design Bateman and Richard Boon established a new way of thinking about game design, one which focusses on the concept that professional (rather than personal or artistic) game design should be focussed towards satisfying the needs of players, thus satisfying the audience for games and ensuring the commercial stability of game developers, calling this approach demographic game design.[21] The book also includes the first typology of gamers, DGD1.[22] This model was based on Myers-Briggs typology, but later work in the same field drew from Temperament Theory.[23]

Bateman's conceptualisation of the way that digital games can, should, and do guide their players deploys the concepts of breadcrumbing, which lays out a path for the player to follow, and funnelling, which guides the player back to this path if they lose track of it.[24] These ideas have been influential, and were brought to a wider audience by game writer Susan O'Connor.[25]

In later books, Bateman has connected game design with philosophy, and particularly with Roger Caillois, whose pioneering work in play and games has been connected by Bateman to modern neurobiological research related to play.[26] He has also developed ideas originating with the philosopher of art Kendall Walton[27] and his serial Game Design as Make-Believe was featured on Kotaku in May 2010.[28][29][30][31][32][33] He has also teased out distinctions between the avatar and that which prescribes the appearance of the avatar, termed the avatar doll.[34]

Philosophy
Much of Bateman's philosophical writing has been concerned with "an attempt to popularise philosophy,"[35] and he has written many articles intended to bring the philosophy of Wittgenstein,[36] Nietzsche,[37] Kierkegaard,[38] Charles Taylor,[39] Kant,[40][41] and Kendall Walton[42] to a wider audience. He has also discussed the metaphysics of author Michael Moorcock in a serial[43] that the British author has praised as "one of the most coherent précis of my work."[44] His adaptation of Walton's make-believe theory of representation puts him into the philosophical school of fictionalism, and he has applied fictionalist techniques to understanding games and art,[34] science and religion,[45] and ethics.[46] Dr. Bateman contributed his philosophies in a talk he gave, most recently, at the 2015 SBGames conference in Teresina, Brazil.

Bateman's moral philosophy focusses upon the role of imagination as a foundation for ethics, and how different ideals collide to create political impasses.[46] Drawing against the work of Moorcock, which he expressly links to philosophy, Bateman distinguishes between ethical systems based upon ideals of moral law (such as those advocated by Kant) and moral chaos (such as most forms of virtue ethics).[46] He has also explored contemporary approaches to Kant's 'Realm of Ends', which he dubs communal autonomy[40] and has connected Kant's categorical imperative to the alterity ethics of Emmanuel Levinas ,[47] as well as relating communal autonomy to Bruno Latour's parliament of things and Isabelle Stengers' ecology of practices.[46]

In 2011, Zero Books published his first book of philosophy, Imaginary Games, which explores the philosophy of games and addresses the question of whether videogames can be art.[34] This was followed by The Mythology of Evolution, which asks if it is possible to present the work of the sciences without distortion,[45] and considers how the work of the sciences constitutes a megatext that sustains a non-religion based upon orthodox science fiction. The book has garnered praise from philosophers such as Mary Midgley who described it as "a book thats badly needed and could be revolutionary", as well as suggesting: "This matters; read it!"[45] The final part of this loose 'trilogy' on the philosophy of imagination, Chaos Ethics, concerns the relationship between fiction and morality and was described by Michael Moorcock as "a genuine philosophy for the 21st century.".[46]

Blogs
His blog Only a Game deals with both philosophy and digital game theory, and contains a prolific array of articles, many of which have been featured elsewhere. Since beginning the blog, his interest in philosophy has intensified, and he recently began to achieve recognition for his work in this field. In 2009, MIT Press invited him to endorse one of their books, Joanna Zylinska's Bioethics in the Age of New Media.[48] He has interviewed Joanna Zylinska,[49] Kendall Walton,[50] Mary Midgley,[51] Michael Moorcock[52] and Allen W. Wood[53] in connection with their philosophy and writing. 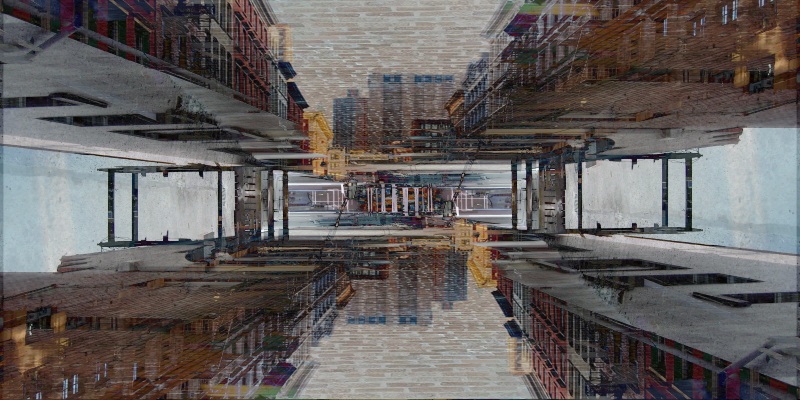 Creative Data And The City

The Royal College of Art and Lumen Art Projects have joined hands to present an online hour of talks and Q&A on how artists are breathing new life into built environments and helping to build community by engaging with art, data and technology.