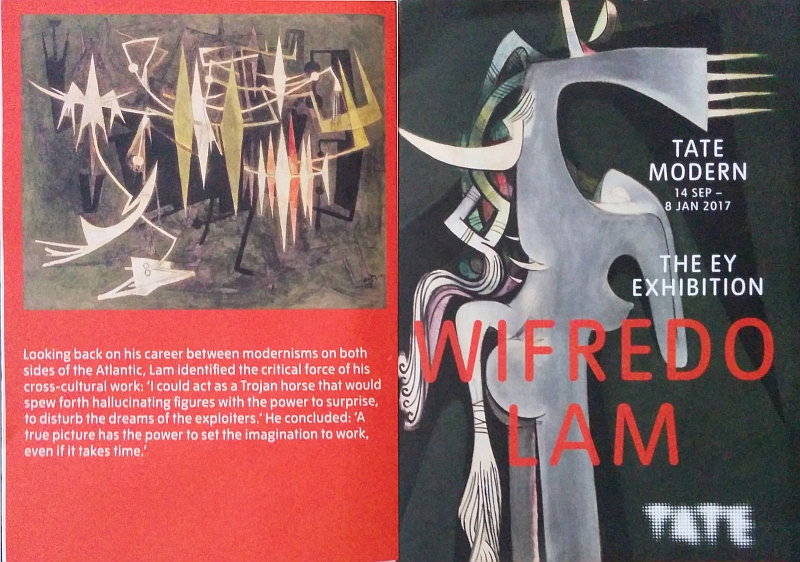 I know looking at pictures has some influence on ones state of mind. Because pictures are looking back.
2016-09-20 01:00:43 I'm writing this directly under this influence. This had been the same gallery space inside the Tate where Agnes Martin and Alexander Calder had been shown.
It change a little though. It was rearranged.

While A.Martin's exhibitions was a constant level of high emotions, though the white room was an highlight indeed, A.Calder's ones started with an Highlight, the figurative wire sculptures,
slowed down a little, just to put spots after spots on an average. Can i express this in a different way? No, just to avoid a misunderstanding. Both
exhibitions were extra ordinary.

Interlude: You may take a look into the 'Georgia OÂKeeffe' too.
More than just flowers. She is an 'intrigue liar'.
One believes one would watch a flower, though one sees
color and light,
movement and composition.
The intrigue is the public image Georgia OÂKeeffe has. So we are the liars instead.

The Wilfredo Lam exhibitions starts small. Interesting first, in the second room even beautiful, but somehow european academic and than picasso like.
Though the is something more. A whisper of a promise. Silence, light and darkness and a very fine line.

The group of surrealist room is an interplay. A historical piece of it's very own. The surrealist investigated games, because of their social component and their randomness.
They where interested in inactive cooperative paintings, drawings and compositions. A lot of nice little collages and drawings in different techniques, in the size of playing-cards and matchboxes,
organized in grids like memory cards.

After this room of little things one finds oneself in a diffuse explosion of fine color. Here and there color and light catches some structure of mind.
But it is an jungle.

The next rooms are a permanent climax of masterpieces. Post war pictures, a fluxus abstract addon and finally pictures that look more modern than the most pictures of today's artist.

Pop? Pop - but with jazz and classic. Colonising the colonizers. Comics, books, storytelling. No, no complete words aka sentences here.
His pictures are open, a three dimensional story. Like a cube, that one can enter from any side, even from the inside. Timing. An open space, open to the world.
*1 *2 #3

I see sculptures, while I watch the picture, and have the feeling of reading a book.
'Surreal' you may say. W.Lam was, is a surrealist.

*1 Just imagine an image that you can enter like a book, but from every side. Like a cube. You can read it inside out, outside in, top down, the subcontext, from left to right while you read from right to left.

*2 Books have give their promise at the outside. Something new, an exciting story. From the cover, and even the deeper at the backside.
Than within the first pages usually they give a second promise. See, the author has written books before. The author knows what s'he is doing. Something old.
We do not trust the new, though we shall not trust the old, though we have to rely on the old, otherwise we would be lost. Lost in space, an open world.
Probably too open, if not naked, world.

No.#3:
So what is the current influence of the Wilfredo Lam exhibition on me?
Well, I decided instead of painting against the light, I paint with the light for some time.
Usually we paint an white canvases and papers. I decided to paint on dark umbra instead.
Which means, the colors will contain more white pigment.*4 There is another option, too, painting into
the light. Yes, this is possible. And many more...

All brains to exit

Part one two three or so of a raw sketches collection about story telling puzzle games.